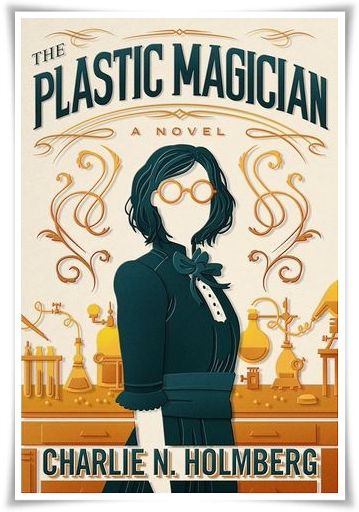 I received a complimentary ARC copy of  The Plastic Magician (The Paper Magician #4 Spin-Off) by Charlie N. Holmberg from NetGalley and 47th North

New to the world of Charlie N. Holmberg I have to say I was pleasantly surprised by The Plastic Magician. This book although a spin-off of the popular YA Paper Magician Series (which I have yet to read) this book definitely works as a stand-alone.

The Plastic Magician treats us to twenty-year-old Polymaker (Plastic Magician) Alvie Brechenmacher’s adventures apprenticing abroad.  Down to earth, intelligent and highly enthusiastic, Alvie leaves her German-American family in the states to apprentice for the world-renowned inventor and Polymaker, Magician Praff in London England.

Enroute she meets a rather rude gentleman who causes her to get off at the wrong train station and this is where her adventure begins. Along her journey, Alvie meets wonderful friends, a kind-hearted love interest and a mentor who respects and believes in her.  Magician Praff and Alvie work on a life-changing invention to not only help a friend but to present at a world-famous convention(contest) for Magicians.  Magician Praff has already won the elite contest and it helped establish him as one of the best Polymakers in the world.  When word gets out to rivals that they are presenting a groundbreaking device that will help many people,  their work and lives are put in peril.

Holmberg does a fantastic job crafting this fantastical cozy mystery. She creates a unique, fun magic system and her characters are interesting, quirky and downright loveable. Although the mystery is fairly predictable, I really didn’t mind because I liked the sweet story that unfolded along the way.  There is a bit of adventure, a bit of romance and a great story that keeps you interested in Alvie’s journey.

All in all a fantastic, fun read that I would highly recommend for young and old alike.

This site uses Akismet to reduce spam. Learn how your comment data is processed.

© Belinda Witzenhausen, & Sylvia McGrath 2007-2019. Unauthorized use and/or duplication of this material without express and written permission from this blog’s author and/or owner is strictly prohibited. Excerpts and links may be used, provided that full and clear credit is given to ProfessorOwlsBookCorner with appropriate and specific direction to the original content.